n) n. : The act of treating or condescending to as if still a young child

Pearlsky got her first wheelchair when she was about three years old. We were given two choices for conveyance, a wheelchair or a special needs stroller. The wheelchair shyster salespuke RTS slime ball vendor assured me repeatedly that there was no medically significant difference for Pearlsky, and he did not outline any other differences to help make the choice. I now know much better (one is better for transport, one is better for school environments, one better for support, etc.) but at that time, there were no real parameters to base a choice upon. 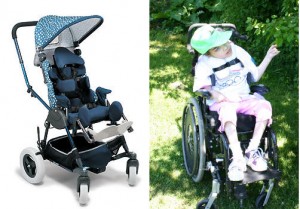 We chose the chair. And I insisted on the big wheels. And black. Why? In my mind, the stroller, especially as she got older, would cause her to be infantilized, especially by others. Big wheels, like “normal” wheelchairs. Black, like normal adult chairs. My rationales would be different now, although the same outcome. Big wheels make the chair significantly easier to use, and black, because personally, I think the way the colorize the chairs is not as aesthetically pleasing.

A couple of times a year there is some food based event in Pearlsky’s classroom for the students and the family. Thanksgiving, Cinco De Mayo, etc. Because I happen to sell the best coffee on the planet, I usually send in a bag for these events. At the last event, I was having lunch with Pearlsky and gave her some of my coffee. This drew some funny looks and a bit of a negative reaction. I asked if they thought it was wrong for an eighteen year old to drink coffee? Should college kids be allowed to? That quieted them down, but it’s not like I am going to give her alcohol when she is twenty-one, although, if not medically contradicted, why would I not?

I recently needed to pick a color for Pearlsky’s body jacket tlso thing. I showed you all of the color and pattern options, Jules and Rachel chose tattoo. Possibly against my better judgement, I chose white. I found it interesting that the very experienced orthotic guy (CO, Cped, FAAOP, Clinical Director … not that I understand any of those titles) told me that “tattoo” was the most popular with today’s teenagers. Why did I choose white? I felt that most of the colors and patterns infantilized her, that adults would typically choose the white, which would, at least optically, disappear under most clothes. I guess I do know adults who would have chosen Marvin Martian or Lola Bunny had they needed a tlso for themselves, but not knowing Pearlsky’s preference, I chose what in my small mind was the most “grown up.”

We went to visit Pearlsky’s brother David last week. As you can see, I dressed her in a purple heart-themed shirt. I think she looks great in blues and purples and this shirt fits her well. It has been pointed out to me that no eighteen year old girl would wear that shirt … it is more appropriate for a younger child. First, I’m a guy, so how would I know? Second, I don’t have a normal daughter, never did, doubt I ever will, so again, how would I know? I think it is clear that I want her “normalized” to age, or barring that, to a more mature age, so here, I messed up. I think I imagine Pearlsky to be more of twelve or thirteen in fashion age, not sure. One part that throws us off is that Pearlsky is about 4’10” (147 cm) and 85 lbs (39 kg), hence she is more the physical size of a young teen. Conversely, I won’t give you her actual measurements (needed for the body jacket tlso), but I will tell you they are numbers, both in ratio and actual units, that many women would die for, very adult.

How do I buy her appropriate woman’s clothes? She is very borderline woman’s extra small. Additionally, because of wheelchair / diaper issues, she cannot wear the same jeans that the high school hotties girls do (they are too low riding) so she needs to wear male jeans.

This gets into all the issues of the famous Makeup Sex post that looked into makeup, styles, and sexuality. Should she be “age appropriate” in dress (hence show her belly and cleavage, wear makeup, …) or do I “age down” her dress and looks? Being her father, and especially because of her disabilities, I am torn in lots of directions here.

People, more often women than men, will talk to Pearlsky in a bit of a “sing song” voice, or a voice that one for whatever reason uses with infants and the very young. Why? I talk to her pretty much like I do to other adults, even at times inappropriately not censoring my words. The “right” thing is probably somewhere in the middle … does it depend on her (totally unknown) mental age? Chronological age?

Television. CSI Miami (her favorite) or SpongeBob SquarePants (my favorite) (and, yes, “SpongeBob” and “SquarePants” are each one word, capitalized like that) (how educational). Cartoons or political talking heads? She reacts to each about the same. She’s eighteen. She is technically old enough to see any movie without an adult. Do I take her to see Inferno when it comes out? (eh, without Lohan, why bother?). For those of you who don’t know what “Inferno” is … it is a film chronicling the life of ’70s porn icon Linda Lovelace (of Deep Throat fame), hence a movie about a moron (and yes, that is an educated opinion) that was to be played by a moron (another educated opinion).

Now, don’t get your knickers in a twist, I won’t be taking Pearlsky to see Inferno. But why not? Seriously, why not?

When should I infantilize her? When not? Is it right to ever do it? Is it ever wrong? And right or wrong in whose eyes? Mine? Strangers? Teachers? Yours? HERS?

Sometimes I get in my own way

First a pre-post post. I owe someone a thank you, and don't know who. When I got home today, there…

Emma has a new post where she mentions articles about possible future cures for such things as Down's and Angelman's.…

Email I sent to Assistant Superintedent for Student Services yesterday morning: I was completely mortified this morning by some of…