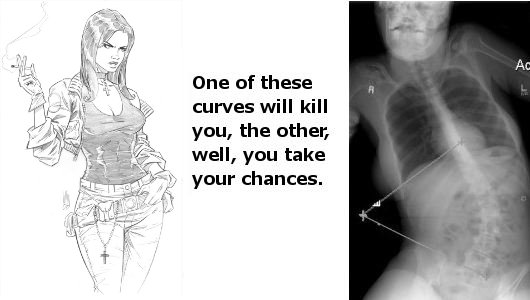 My mom tells me that the woman on the left will kill me, and the doctor today told me that with the woman on the right, there is no way to tell. What to do? Whatever … you take your chances.

We went for a second opinion on Pearlsky’s scoliosis today. This doctor is the chairman of orthopedics in a major hospital, he has been around for years, and I really trust him. He is the kind of doctor who tells it like it is … even when it hurts. For instance, David’s ankles and feet are not so good orthopedically. He has explained all the options, including pretty scary surgery and then he adds, “And you do realize, that even if we fix these orthopedic issues, he will never walk.”

A couple of years ago Pearlsky may have broken her wrist. We went for x-rays and then went to the orthopedic clinic. I saw the nurse manager and asked if we could see Dr. K. She told me that his daughter was getting married the next day and he was not in. As we went to wait in the waiting room, Dr. K. walked in the door, in jeans and “street” clothes. He said “hi,” I congratulated him on the wedding, and he said he was just in to grab some papers. Two minutes later we were called, and, yes, Dr. K. examined Pearlsky and the x-rays. We all left together. This is the kind of guy he is.

Since our physiatrist is at the competing big city hospital, we originally went to their orthopedic director for the current scoliosis issue. They gave us the barely usable body jacket (in boring white) (my doing), and the bit of a push for surgery. Today we went to Dr. K. for a second opinion.

Right off the bat, he boggled my mind. There is a set of x-rays from October that both teams are using for the original diagnosis, the image above is from that set. The other doctors measured the curve shown at 52 degrees. The doctor today measured it at 60 degrees, about 20% larger. WTF? The same image, both using computerized tools for the measurement. Does it matter? Well, from a scientific / engineering point of view, hell yes. From a medical point of view? Not really. A doctor may say yes, but I prefer doctors that go by symptoms rather than numbers AT TIMES. It is sort of like if you look at a woman (or guy) and think she is drop dead gorgeous. It does not matter if she weighs 100, 120 or 150 pounds, whatever the number is does not matter, it is the looks. Well, it should be the same in some medical instances. Do we care what Pearlsky’s Tegretol level is (one of her seizure meds)? As long as it is not in the toxic range, I want to keep the level wherever the seizures stop, the actual number is moot. But I digress …

He looked at her sitting in her chair.

“I can see the curve, but she looks good.”

I explained how it is close to impossible for me to put her body jacket on her by myself. He shrugged and said “don’t.”

It comes down to the fact that no one knows what will happen. She stopped growing years ago. The body jacket may or may not make her more comfortable in her chair. The curve may or may not progress. The jacket will not remove the curve, it will just hold her straighter when she is in it. And not all that much. There is really no need to do anything until she is either uncomfortable, there is any damage (organ, etc.), or her ribs are touching her pelvis (don’t even want to think about that). In essence, why fix it with major invasive surgery when in fact, there is no real problem? Why struggle with the jacket when it probably makes no difference?

Hey, leave my child behind, please

A couple of things are getting to me the last couple of days, not the least of which are the…

I told you so!

Something came up with my son. Not a big deal, but needed to be dealt with. Remember my ex is…

As some of you know, I have a blog best-friend-in-the-whole-world. Well, he is if you don't count all my other…