Ophidiophobia – an abnormal fear of snakes. Well known sufferers include Indiana Jones and Adrian Monk. I do not have such a fear, but it is interesting to note …

A new study suggests that such fear has been shaped by evolution, stretching back to a time when early mammals had to survive and breed in an environment dominated by reptiles, some of which were deadly. (National Geographic News) 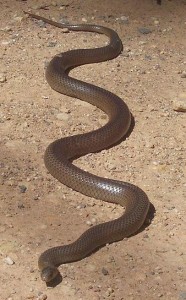 does not freak me out. That happens to be one of the most deadly snakes in the world, but alas, I don’t live in Australia. But nonetheless, neither Pearlsky nor I are freaked by these things. The shape, the curve, even seeing skeletal snakes, nope, not freaky. 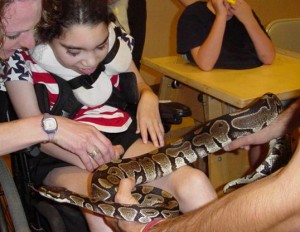 Turns out, she actually seems to like them. My mother, on the other hand, has never seen that photo. Talk about ophidiophobia. She actually hot air ballooned over the Serengeti, but would not get out of the basket on the grass! But I digress …

So, take a look again at the first photo. What is it about snakes? I think maybe it is the curves. Now, like Ken, I do think some curves are definitely worth looking at. But some are not. Some, I find, I have a visceral reaction to. A hard core, deep inside the gut, revulsion. I have no idea why. 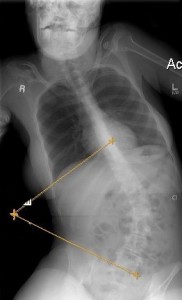 I look at that curve and naturally turn away. It is not a logical reaction, it is emotional. It has nothing to do with it being a body or biology, I saw things as a paramedic that people are not supposed to see. These things don’t freak me out. Hell, I held, and helped, during Pearlsky’s spinal taps. But images of a spine like that just get to me.

This my friends is a problem for Single Dad. For, you see, that is Pearlsky.

She has been diagnosed with scoliosis. Not an uncommon diagnosis at all. But, the diagnosis was very recent. Three years after she stopped growing.

I know, you want to say “Single Dad, holy shit, how did they not see that before it got that bad?” Well, don’t say that.

A little while ago Elizabeth, wrote this post. In short, her lovely daughter, Sophie, had an MRI and it resulted in a diagnosis, a reason for the seizures, etc. “Wonderful” you say? Yes, of course. Elizabeth warned against asking questions such as “Why has she not had an MRI in ten years?” and “Are you going to sue the doctors?” and the like. Actually she didn’t really want any questions. I get that. I really do. I’m with ya on that one Elizabeth.

My reason is mainly because there is no answer. And, it does not matter. The fact is, Pearlsky now has scoliosis. And her dad can’t look at the xray without wanting to puke. Not because it is Pearlsky, I don’t want to see any xray like that. Very unlike me.

We have a lot of information now on Pearlsky. I know her scoliosis is a 50 degree curve when she sits (shown in that x-ray above, the yellow lines show how the angle is measured) and a 27 degree curve when lying down. Her spine is very flexible, I actually watched the doctor straighten it with his hands (that did not bother me as much as the x-ray!).

I am NOT looking for a discussion on scoliosis, what we should or should not do, etc. I will share more about the big shot doctor appointments if you like. I know there are greatly divergent thoughts about the condition and how to deal with it. Yes, I know all about Harriet McBryde Johnson, the self described crip, lawyer, disability activist, and more. 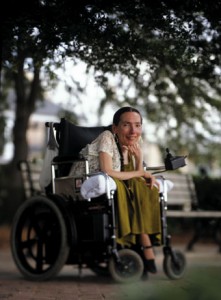 It’s not that I am ugly. It’s more that people don’t know how to look at me. The power wheelchair is enough to inspire gawking, but that’s the least of it. Much more impressive is the impact on my body of more than four decades of a muscle-wasting disease. Now, in my midforties, I’m Karen Carpenter-thin, flesh mostly vanished, a jumble of bones in a floppy bag of skin. When, in childhood, my muscles got too weak to hold up my spine, I tired a brace for a while, but fortunately a skittish anesthesiologist said no to fusion, plates, and pins — all the apparatus that might have kept me straight. At age fifteen, I threw away the back brace and let my spine reshape itself into a deep twisty S-curve. Now my right side is two deep canyons. To keep myself upright, I lean forward, rest my rib cage on my lap, plant my elbows on rolled towels beside by knees. Since my backbone found its own natural shape, I’ve been entirely comfortable in my skin.  ~Too Late to Die Young: Nearly True Tales from a Life

Now we understand why Pearlsky wakes up from a nap in her chair so miserable that she will bring on a seizure, yet waking up from a nap while lying down is fine. Next we need to figure out what to do … and that, as the doctor said, depends on her quality of life.

"I distrust camels, and anyone else who can go a week without a drink." ~Joe E. Lewis

Seems like it's been a week since I posted. Wonder why that is. Jules sent me a link to a…

An email I received today, just as I received it. As a regular reader of your blog, I read today's…

"The quality, not the longevity, of one's life is what is important." ~Martin Luther King, Jr.

Warning, Single Dad is going crazy again. Just to let you know. Imagine you are driving down the street, maybe…