All sorts of stuff to keep you up to date. I will pretend you care, so you pretend as well, ok?

Remember when Carlson Labs screwed over my kids and abruptly stopped supplying the life giving amino acid that is the key to their disability? And then a “fantastic, goddess-like pharmacist,” Roxanne found me a compounding pharmacy. Their price is $150 per kilo, down from the $175 I was paying those other evil vendors. Each of my kids uses a kilo (2.2 pounds) in forty days. Well, the new pharmacy left a sticker on the last bag I picked up … a sticker from their supplier. So, what does SingleDad do? I call that supplier, and with just a credit card, they will sell me the amino acid! I need to buy five kilos at a time (no problem) and the price? $85.00 per kilo!

A friend of a friend recently had a procedure (allegedly) where she had her uterus cauterized, a woman in her forties. This resulted in no more periods while leaving all the hormones and stuff in tact. And (allegedly) it was an in-office procedure. I need to learn more, such as is this considered permanent sterilization?

Pearlsky’s urinary tract infection (UTI) appears to be resolving. She had issues with several antibiotics and that is a first, but finally Cipro seems to be doing the trick.

Ever since that nice email (don’t tell anyone) I have heard several times from the adolescent clinic. They want me to join the parents advisory group! (Talk about being careful what you ask for.) They supposedly had some people come in and look at the handicap access of the clinic as well. Wow. And K, one of the women I mention in the email, is helping resolve some issues, such as the come-a-half-hour-early-so-we-can-mess-up-your-schedule-and-make-Pearlsky-unhappy-and-not-see-you-for-an-hour thing that happens. Go K!

When there is new construction, one must follow the Americans with Disabilities Act, the ADA, and any local and state laws. There is currently a recession and the government has attempted a stimulus that has included money for communities to update “infrastructure” (i.e.: roads, bridges, pockets of scummy contractors, etc.). It has been decided to make some sidewalks in our neighborhood accessible! 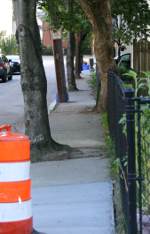 Some things about the old sidewalk are shown is this picture. The most obvious problem is the trees and the start of the roots … there is no way to get a wheelchair past that first tree. The same is true when you go down the street with other trees, phone poles, etc. It is just not accessible. This is one side of the street, they decided to make the opposite side accessible, probably because it did not have the telephone poles. The sad part is that they had to rip out a half dozen beautiful old trees, but the rule is that if you remove one, you must replace it, so that is not so bad. Unless you are an idiot, that is. And if you are an idiot, you don’t think about the cripples. At least that’s what I am about to tell him, in a nice sort of way.

The width of an accessible sidewalk is supposed to be 60 inches (1.5 m), but is allowed to be as narrow as 36 inches (~1 m). Note, that is the width of the “sidewalk.” Now, how do you define “sidewalk”? Is it the cement on the ground? Look at this, from a tutorial for contractors … 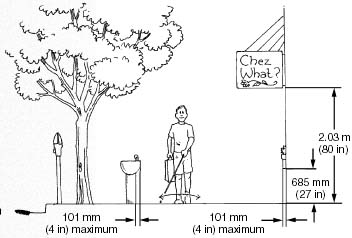 The important point here is that the designed width must continue upward for 80 inches (2.03 m). It would make no sense in the image above of the store sign was 3 feet (1 m) off the ground, right? Ok, so the width of the sidewalk needs to continue upward to what is basically the height of a door frame, makes sense. 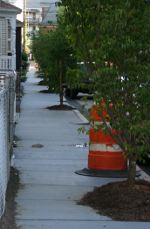 My point? Well, Mister Poop-for-Brains chose the trees for the renovation very carefully … yes, trees that have branches that start at knee height! Pearlsky gets poked in the eye when we walk down the brand spanking new street. Every tree needs to be ripped out, which will destroy them, and replaced with a more appropriate choice. And the worst part? The contractor was told, AS HE WAS PLANTING, that the trees were wrong, the claimed that he knew they were wrong, and was told to plant them anyway. Ugggg.

Have I ever mentioned that I have a low tolerance for idiots?

I took a quick look at my statistics ... this is a snapshot (unedited) of people looking at this blog…

All sorts of stuff to keep you up to date. I will pretend you care, so you pretend as well,…

Bad night last night, sleeping late. Pearlsky is home (between school and camp), so we were each sleeping (finally). Nine…