Home  »  Family • Parenting   »   “A lot of people are tired around here, but I’m not sure they’re ready to lie down, stretch out and fall asleep.” ~Jim Jones

I’m tired. And yes, that quote is from that Jim Jones.

I need to get away for a day later this week, and it is school vacation week, so Pearlsky is home. It took me three days to arrange for care for her, one nanny from 8 to noon, another noon to 1:30, the next until 6:00, then one more for the evening. And you wonder why I’m tired?

Rick Santorum? Gonna vote for him? I have two words for you … Terri Schiavo.

Do bad things happen to good people to offset the good things that happen to bad people?

Pearlsky will never walk. Even if her body would let her, her mind would not. It just ain’t going to happen. So why bother with afo’s (those funky ankle brace things). Does it matter if her ankles turn in? I stopped using them. Go ahead, call social services. Let them take her away. I dare you.

I get an email from some woman who found my foundation about Pearlsky and David’s disorder (remember, there are a total of four known cases in the U.S.). In part:

I have an 8 month old baby girl … she has been struggling with multiple health problems since birth. She grows very slow and we have struggled to keep her out of the failure to thrive category, she has had issues with hitting her milestones on time, possible seizures, and tons of digestion problems. It has been a serious struggle for us getting answers to her problems …

How hard do I bang my head against the wall? She suspects the child is having seizures yet the naturopath is saying she should not go to a neurologist … and she doesn’t. Why should she? She herself has a metabolism disorder and never saw a metabolic specialist. There are things in this world that are not meant for me to understand.

Why is there the occasional day where Pearlsky is “there”? I mean here. Ok, I mean there are days where she understands, where she will look me straight in the eyes every time I ask her to, and her soul is obvious. Her eyes are not empty, but full? The days are few are far between, but noticed by others as well. What is that about? More to the point, why are those times harder than when she is hollow?

Trazodone is used to treat depression. It has the off-label use as a sleep aid. I know many people who have tried it, some use it fairly often. Several of my friends have told me that they rarely use it because it gives them really funky dreams, usually unpleasant ones. Actually, they all report strange dreams from it.

I give Pearlsky a Trazodone nightly to help with sleep. How fucked up is that? 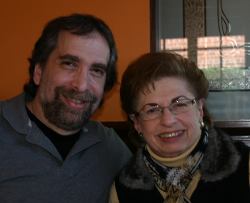 Want to see why I have not caused Pearlsky and me to be a statistic?

Damn I’m tired. Pass the kool-aid, will ya Reverend?

Pearlsky and I are ok-ish. I have been dealing with way too much and wanted to post today, but as…

"I say there is no darkness but ignorance." ~William Shakespeare

Sorry, Billy, I disagree. I am more of an "ignorance is bliss" kind of guy. (From Thomas Gray's poem, Ode on a…

I was not sure if I was going to follow-up on the previous post, but alas, I must, as you…