When we hear of a death, we try to affirm that the holy One, blessed be He, knows what He is doing. Hence we say “Blessed is the True Judge.” Being the heathen I am, I say it anyway. Even though He may be a She, and either way, S/He may not know what He or She is doing.

We lost a member of our community recently. I often refer to “our” community, those who are severely disabled, and in this case it is even closer, a reader, an internet friend, someone whose parents I admire.

Aria, the youngest daughter of Rachael (Socially Inappropriate Mom) and Kevin passed away this past week while at home under hospice. There was a celebration of her life yesterday. I know that Rachael has not updated her blog in a while, hopefully she will soon; I am sure she has much to share.

On December 23, 2010 I got an email from Aria’s father, Kevin, before the birth, and I reached out to my readers on his behalf. See that post here, worth reading, it is short! Basically he was asking what to expect, knowing that his daughter would be born with severe disabilities.

Many readers responded to me privately, several responded on the blog. The general consensus among the private, to-me-only emails was “tell him to run like hell.” Some questioned why they were continuing with the pregnancy (not a question I would ask, at least not out loud). Others had no idea what to tell him. And several wrote public comments on the blog, as I did.

I got to know them a bit via the blogs, the evil Facebook, and a few emails. Rachael became the only social worker on this planet that I have great respect for. She became a powerful advocate not only for Aria but for others with the same disorder (Fanconi Anemia). People say to some of us “I could never do what you do” … and my answer is typically “most of us rise to the occasion. You don’t know what you can do until you need to.” Rachael rose to the occasion. During this ride they discovered that Daisy, their older daughter, has some challenges herself (not even close Aria’s issues, but challenges nonetheless).

I do not know how Kevin ended up dealing with the situation; at least from my view, he was not as public. The bits I have seen, show him right in there with the girls, being the dad he needed to be. Rachael did not do this alone. I will absolutely be inviting Kevin to write to us at some point and give advice to the next parent that reaches out. I would love to hear what he has to say.

Aria and Daisy have had multiple trips to Disney (a place in which SingleDad has never stepped), a special sensory room in the home, all the services that the government and community have to offer (where some of that advocacy came in), and as normal a life as possible in such a situation. Kudos to Rachael and Kevin. I could never do what they have done.

May Aria rest in peace. Somehow we must believe that Blessed is the True Judge. 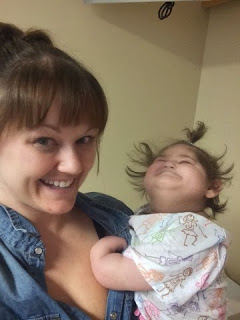 When the teacher is the bully ...

New client, first meeting I attended as the advocate. I always follow up a meeting with an email with the…

I am having trouble believing the responses to the last post ... morons do really say the darndest things. Well,…

Of quotes and wheelchairs

If you can't do your job, why is someone paying you? Actual phone conversation with a pharmacy technician from CVS,…