If you read both my posts and the comments, you will see that my last post went from my proclamation that I don’t “get” naturopathy or homeopathy to gay marriage to the ex-magician now major debunker James Randy. Just because I don’t get those therapies does not suggest that I think they are not real. As mentioned, I do believe acupuncture works, but I have no clue how (nor do I really think anyone does). And I fully believe that some of the associated therapies work, but like I said, I don’t get them. I don’t understand how any homeopathy can work. But then, I am not all that sure how my car works, but it does. I do believe in evolution, but I also know that dinosaurs and people co-existed (Hanna-Barbera repeatedly proved that during my childhood). As for same sex marriage, that doesn’t faze me in the least, it’s no sex marriage that is disturbing. Oh, and I have met James Randy several times (during my magician stage, that was fun) and heck, he is usually right, but then, I don’t get that either. And I swear to you that I did not know, until this instant when I looked for a link to him, that he posted this homeopathic challenge two days ago!

I am trying Twitter, and I now have 8,622 followers! Oh, wait, you can tell, right? Ok, maybe a baker’s dozen. Now I need to learn how to see who responds and says what to my tweets and what it means to follow others. I’ll get there, or Mom will want a refund on all those geek tuitions she and Dad paid …

Yesterday was road trip day. Here is a picture of me and Pearlsky visiting David, her first time there. The staff first wanted to know what residence (in that facility) she lived in! I was going to leave her there with the weekend staff … but, well, I didn’t. They all thought that David looks like me or Pearlsky and he look alike. I think they are all a bit touched. None of us are at our best in this picture, but there you go. 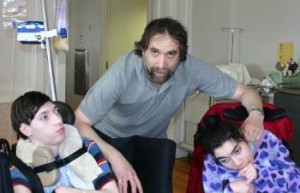 Then there is the IEP in two days. My notes are growing, along with the copies of emails and documentation I am taking. I am a bit concerned about my demeanor in the meeting. I don’t get loud, nor nasty, but I do have a knack for turning someone’s words against them (not only in email, but on the fly) and just nailing them. I am not proud of this, necessarily, but it is a gift, I guess. In preparation, I called the wonderful Coordinator of Special Education for the high school. As I have said before, this is her first year at the school, she has a son with a disability (hence she “gets” it), and we definitely respect each other. We had a nice conversation and I told her that I may lose it at this IEP, how I am tired of many things. She said she fully understood.

I am telling you that I may go after someone and want you to know that you are the only one that will be there that will be able to stop me if I get going.

So I think you should either sit across from me and make a face or say something, or sit next to me and just kick me.

Yes, actually. That would work.

Great! There have been many IEPs where I have wanted to kick the parent! You got it.

"I feel your pain." ~Bill Clinton

A couple of quick things first. Welcome to Kevin and Zac on the Gallery page ... have you added your…

"I feel your pain." ~Bill Clinton

A couple of quick things first. Welcome to Kevin and Zac on the Gallery page ... have you added your…

Things I just don't get

I don't really get naturopathy. I can understand, and support, acupuncture, but chelation therapy? Colonic enemas? Cranial osteopathy? Why would…