Read this sign, posted where one enters the adolescent clinic of our hoity-toity hospital (pardon the crappy cell phone pic): 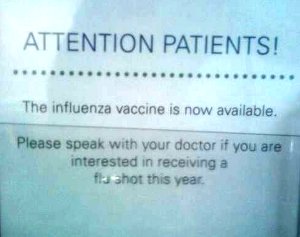 Now, by a show of hands, how many of you think that that sign says that the influenza vaccine is now available. Come on, raise your hands. I guess English is not your first language. Or second …

So I say to the lame guy checking us in, “Can she get the influenza vaccine while we’re here?” He says he will check.

I’m sorry, the nurse says we don’t have the vaccine yet.

He just shrugs. SHRUGS. That’s it. It must be me. It really must be me. (Note to self: gotta learn English …)

Like in one of those movies you can’t follow (well, I can’t), that incident goes about 3/4 of the way into the story I am about to tell you. That happened today (Friday) at about 12:45, let’s travel back in time together to this past Monday … ok everyone, into the time machine, here we go …

Pearlsky has not been feeling well for a while (dial back three posts if you forgot). Monday morning I call the urology office, and speak to Nurse Angela. No, I ain’t even trying to hide her name. I want to make sure Cerberus lets her in (and you just know that Cerberus reads my blog, or at least pees on it …). I explain that Pearlsky has not felt well, she has been having recurring UTIs, tell her about intermittent pain, I know it’s a UTI and ask her to refer to the doctor’s last notes a couple of years ago. She reads aloud …

If she starts to have recurring UTI’s again, it would make sense to have another nuclear scan.

Direct quote. I ask her if we can just put her on antibiotics and do the nuclear scan to check for vesicoureteral reflux soon. She says she will talk to the doctor and get back to me that day (Monday).

Tuesday afternoon I call and ask if there is an update and tell her that Pearlsky is not doing too well. In a voice with attitude, she tells me she has not spoken to the doctor yet and will get back to me that day (Tuesday).

Wednesday this email goes to one of Pearlsky’s great PCPs and is cc’d to the other, as well as the Patient Relations lady who usually likes us …

I need your help with urology (the department, not mine!)

I believe Pearlsky is still having UTI issues, there is something wrong that I cannot figure out. The last time we saw you, you were going to have someone call urology for a follow up. I never heard, but that make sense … read on.

I called urology on Monday morning and spoke to a nurse, Angela. I explained how Pearlsky was a patient of Dr. B, how she has had recurring UTI’s over the last months, how I think she has one now. Angela saw in the record that when last seen by Dr. B, he wrote that if this happens, it makes sense to do another nuclear scan. I asked her to arrange such and that we need to deal with this since Pearlsky is not ok. I also asked if the scan can be before any appointment since their office is horribly wheelchair hostile and things would go quicker. She clearly said, and I confirmed, that I would hear later in the day. That was Monday morning.

Tuesday afternoon I had heard nothing so I called and asked for Angela. I asked if there was an update, and in a somewhat annoyed tone she said “no” and that she had not spoken with the doctor and I would hear later in the day.

Wednesday afternoon, still nothing, and I am begging you for help.

Do they still flog nurses?

She emails back that she will do something. Then Thursday morning the Patient Relations lady calls and tells me she will help as well. The middle of Thursday afternoon the P.R. lady calls, says she has spoken to the nurse who claims that on Monday she told me to have Pearlsky’s PCP do a urine test, and she thought that was the end of it, other than adding that she spoke to the doctor this (Thursday) morning about Pearlsky and he recommends that as well since he was on his way to the airport. OK, who can figure out the lie? Show of hands? Yes, you in the front row …

Why did she speak to the doctor about Pearlsky on Thursday morning if she thought the issue was resolved Monday?

YES, you win a flu shot, just not today. Because she lied to the PR lady. Because she never checked with the doctor as she told me she would. She dropped the ball even though I “pinged” her on Tuesday. OR, ENGLISH IS NOT MY PRIMARY LANGUAGE, or secondary, or whatever third-dary is … I just did not understand the nurse. Damn. My fault.

I did not speak to the doctor yet, I will call you back today = screw you and your daughter, call your PCP

So, I get the next appointment with the PCP’s adolescent clinic for a urine test to show she has yet another UTI and needs the nuclear scan. It is now Friday. We go for a 1:00 appointment and lo and behold, a sign saying we can also get a flu shot! Well, no … (see opening part of this post)

Some doctor comes in, turns out to be a fellow, and she is interacting fantastically with Pearlsky (and me). I ask her if she was warned about me. She just smiled. Then I get the usual “oh yeah, and why do you think she as a UTI?” but said nicer than that. We get to the catheter part to check … and I open Pearlsky’s diaper, look at the doctor, and ask, “now do you believe me?”

“Is that her period?”

The catheter filled the catch cup with what really looked like all blood. With a bit of urine mixed in. Not pink, not a little, lots, deep red. And yes, it was from her bladder.

The email, upon getting home, to the two PCPs, cc’d to the Patient Relation lady …

Pearlsky had a urinary catheterization today, the cup was full of blood. She’s on Cipro.

I’m so glad that nurse Angela in urology took from Monday morning to Thursday afternoon to bother to talk to Dr. B and never get back to me.

A nurse in the adolescent clinic got Pearlsky a urology appointment for October and an ultrasound, which I don’t understand for lots of reasons, but we will deal with that later. Right now Pearlsky is crying and I hate the world.

And this evening to Ms. Patient Relations:

You probably saw the email, Pearlsky’s urine draw was completely filled with blood.

I really would like you to believe that if a nurse told me on Monday that I needed to see Pearlsky’s PCP, I would have immediately. Pearlsky has been spiking low grade fevers, crying unexpectedly, etc. I know her UTI’s. She was very uncomfortable all last weekend. Why would I not take the urology nurse’s advice? Only if it was NOT given, as was the case.

I called urology for a reason. On Monday the nurse clearly said she would talk to the doctor and get back to me. I told her Pearlsky’s symptoms and that she was in intermittent pain.

On Tuesday afternoon when I followed up she told me (with attitude) that she had not spoken to the doctor yet. I once again told her Pearlsky was not well. She said she would get back to me.

It was not until Thursday that she bothered to speak to the doctor and then we played the child’s game of telephone for her to tell you to tell me to see Pearlsky’s PCP.

I understand you know the nurse and think well of her. Personally, I hold her one hundred percent totally responsible for Pearlsky’s pain and discomfort this week. If she had done anything she said she did or would do, Pearlsky would have been on antibiotics Tuesday. Angela completely failed Pearlsky, told you untruths, and Pearlsky suffered because of it.

Why would I not do what a urology nurse tells me needed to be done? That makes no sense. I called urology for help. How stupid do I look?

I sincerely hope something is done about this. I will at a minimum be sharing with Dr. B. Out of respect for you and your position in Patient Relations I am not copying Angela on this email.

There’s a table reserved in hell for some nurses, hope Angela likes school nurses, she’ll be spending eternity with them …

Understand that Pearlsky’s UTI symptoms started clearly this past weekend, for weeks before I could not figure out the issue. If her reflux has returned, then the infection is sort of bouncing between her kidney and bladder, we saw this years ago. The blood started to show today, you can be damn sure we would have seen someone sooner.

Have a great weekend, I’m gonna go hug my daughter. The one who can’t say “Damn it hurts when I pee.”

DO NOT RESEARCH ANYTHING on these here internets. Pearlsky has a boat load of Group B streptococcal bacteria colonies in…

When my daughter was five we had her tested for allergies, we knew she had some. Turns out the problematic…

Twenty-five years ago she was the loud little girl next door ... and I was probably the creepy old guy…