We just received our third new wheelchair in three months! If you want the simple punchline … we are keeping it. You can stop reading now.

It has become clear that we have reached the limits of the abilities of the wheelchair manufacturing world and I really don’t understand this. We are working with one of primary manufacturers of wheelchairs for this population, Sunrise Medical, and their largest DME distributor, National Seating and Mobility. We’re talking thousands of chairs a year.

I know some of these people personally. Some of them are fantastic, wonderful, smart, intelligent, caring people who really want things to go right. Some others, not so. But that is to be found everywhere. I do believe that the vast majority of the people at these two companies (and I am sure the others) are really good people. Some are parents of kids like ours. Why am I saying this? Because I do think some of these issues are ingrained in the industry somehow, not the individual people. Or maybe it’s just me. I encourage those in the industry to just tell me where I am wrong here. 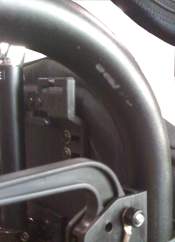 Remember the scratches on the first chair (and some on the second)? Well, this chair is no exception. By the time the chair arrived in the house it was scratched in several places, some very obvious (see image on left, one of many examples of how the manufacturer sent the new chair parts). I know that the scratches were on the parts when they were received by the DME. It appears that the manufacturer does not know how to properly protect the parts during shipping or just ships scratched parts. Not only visible scratches but parts of the frame already have touch-up paint.

I don’t get it. Would a car dealer deliver a new car with obvious scratches and obvious touch up? Or even a used car? Would Sears deliver a washer and dryer that are all scratched? Would you accept them? Would you accept a new bicycle that had multiple obvious scratches on the frame? The DME has offered to replace the scratched parts, they would be the fourth set of parts and personally I don’t fully believe the manufacturer is capable of delivering them in new condition (using the common definition of “new”). I am tired, I will touch up the scratches.

A quick diversion here before more problems with the chair. When we were ordering it, near the last minute, the actual chair designer (a GREAT guy named Rich at Sunrise Medical), had some suggestions. I thought they were great and I asked for an engineering drawing as to what some measurements would be if we went with his ideas (go with a Quickie vs. a Zippie (adult vs. pediatric) ). I have been told that I am the first customer to ever request such. What an honor! He sent me the drawing with the measurement I needed and I told my RTS that it was great, let’s go with it.

Then a surprise. My RTS told me she would not order the chair unless I signed the engineering drawing! Very bizarre, obviously no one in the history of the company had to do this since I was the first to request such a drawing, but heck, I must be such an asshole (my word, not hers) that she wanted to know this is what I wanted. Okay, I figured I would “behave” and I annotated the diagram and sent it to her. She accepted it and ordered the chair. Here is the drawing, with my annotations, click on it to enlarge it. I will be referring to it. 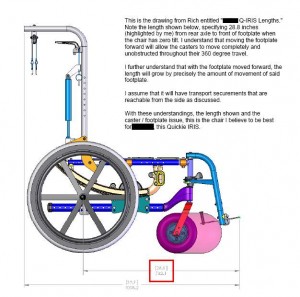 The first point in that drawing, and what mattered most, was the measurement from the primary axle to the front of the chair. It makes a difference in our van, and in our house. I cannot move the walls of the hallway to accommodate a longer chair (matters when turning). In ALL the interactions with both the DME and the manufacturer, this measurement was key. As a matter of fact, this is how everything started. Anyway … the drawing that I was required to sign and agree to shows 28.8 inches (I even emphasized it with a red square). My note on the drawing specifies it as well. The design engineer’s cad software shows it. I SIGNED OFF on the engineering drawing that specifies 28.8 inches and was required to do such before the chair was ordered.

So, what’s my point? The actual measurement of the delivered chair is 30.25 inches. And yes, it matters, big time.

The next point in that drawing, that I had to sign and agree to before the chair would be ordered, is that by moving the position of the footplate the casters (front wheels) will move 360 degrees (be able to spin around in any direction) even with the chair at zero tilt. Simple theory, the chair would work as the designer intended, not like the first chair of this series which did not work. Again, no tilt of the chair but it could be turned in any direction, the casters would be free to move as intended. We knew the requested footplate would interfere unless positioned properly, and that was fine.

So, what’s my point? The casters hit the wheelchair chair FRAME, it has nothing to do with the footplate and when the chair is in zero tilt, THE CHAIR DOES NOT WORK, even with the footplate removed. The manufacturer claims that this problem would be “red flagged” and obviously it was not. Heck, the designer’s design says it would work. It does not. The entire chair is using off the shelf parts, nothing custom, it should work. It does not.

What’s even better? When the chair was delivered, there were these plastic locks put on it by the DME so the chair cannot be put into zero tilt! It will only go down to 4.5 degrees. That’s the solution … it hurts when you do this? Don’t do that.

Funny, my car engine was making a strange noise the other day. Know how I fixed it? I turned up the radio.

The two primary points on the engineering drawing that I had to sign in order to get the chair ordered are completely, obviously, and knowingly violated. Why did I need to sign it? To ensure that I knew that we were not getting what we were ordering? Where did I do something wrong?

There are other issues, smaller ones that I can change with some wrenches, etc. but, alas I was specifically told they would be different.

I am tired. We are keeping the chair. And I am sure my DME friends hate me. Please, seriously, tell me where I am wrong, other than simply expecting a chair in new condition that works as advertised? Tell me.

I am not going to post about this chair stuff anymore (well, probably not). Just not worth it, and too embarrassing, but I just want to make my last points here. In regards to the three chairs over the past three months:

So who is the retarded one?

I wrote an email to the CEO of Sunrise Medical offering him an opportunity to respond to my issues if he wanted to. I promised to reproduce his words, as is, without comment. I will let you know!

All I want is a wheelchair that is in new condition and works as advertised. NOTE: There is a piece of paper in the backpack delivered with the chair that shows the cost to be $8032.60. And it can’t even roll straight! Sunrise Medical cannot seem to deliver a chair in new condition that works as they claim it does, that is the size they claim it is. Boggles the mind. Do you think the Attorney General or Consumer Affairs or the insurance company would care?

These progress reports are as enlightening as the IEPs themselves. Our next IEP meeting is the end of the month.…

"It was accountability that Nixon feared." ~Bob Woodward

From this post a few days ago, we know that the residential facility that pretends to care for my son…

I swear, I have not taken any of my meds tonight, none. I rarely post twice in a day, but this…