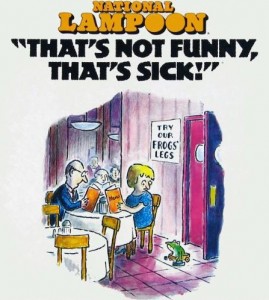 I’m deep asleep. Probably dreaming about Aphrodite or something when I get awakened. I know I am deep asleep by the fog I am in, Pearlsky used to wake me up multiple times a night, and when she it me just right (i.e.: wrong), probably REM sleep or something, it would be the worst. Almost painful. Yet the monitor (and I steadfastly refuse to call it a “baby” monitor) wakes me up.

I walk into her room, and she is laughing. Loud. Energetically. It’s 3 A.M.

I try to figure out what is up. I pull back the comforter, check her legs, inside her diaper, her chest, back, nothing. She is laughing. Hard.

I turn the light up some more. Check her neck, ears, head. Finally I look in her eyes.

Vacant. Just like the freaking Bate’s Motel. Ladies and gentlemen, we have a vacancy.

Let me just announce here and now, gelastic seizures suck. They are designed to screw with your head as much as with the brain they are screwing with.

Wikipedia says it as well as anyone:

A Gelastic Seizure, also known as “Gelastic Epilepsy” is a rare type of seizure that involves a sudden burst of energy, usually in the form of laughing or crying. This syndrome usually occurs for no obvious reason and is uncontrollable. It is slightly more common in males than females. The term Gelastic originates from the Greek word “Gelos” which means laughter.

How do I know it was a seizure?

The shirt off my back

You know that look. You see it coming. Your heart races, you grab a towel, blanket, something that's around and…

I wish I were dead

Never give a gun to ducks. Ever.

I have always told my employees, on their first day of work, "If you need an afternoon off, do not…